Babes in Boinkland: From Rags to VEGAS!

Boston's own Babes in Boinkland are heading to Las Vegas to compete at the 22nd annual Burlesque Hall of Fame weekend. W00t! 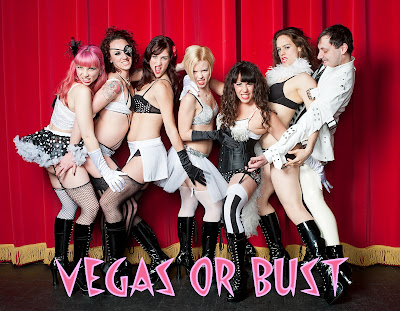 Founded in 2006 by The Slutcracker creator Vanessa White (aka Sugar Dish), the Babes did not initially plan on becoming a full-time dance company. Lucky for us, they decided one show was not enough.

Since their first day out, back in April of 2006 at the Middle East Downstairs, members have performed around New England and New York, Los Angeles, Montréal, and even Honduras. They have shared the stage with Weird Al Yankovic, The Beach Boys, Amanda Palmer, and Richard Cheese & LATM. They have graced the stages at Somerville Theatre, American Repertory Theatre's Oberon, The Wilbur Theatre, Boston Symphony Hall, Boston ICA, House of Blues, Bowery Ballroom, and more.

Following the break is the Story of BiB, as told by Sugar Dish (re-posted with permission) from the Babes in Boinkland blog.

The Babes have launched a Kickstarter campaign to help fund their trip to Vegas. Check it out!

When the magazine was getting started, we would throw parties at clubs around Boston to try to drum up some attention, and BOY did that work... but not in the way intended.

These parties would regularly get busted up by police under the charge that they were lewd sex parties.

So the tiny Boink Magazine staff had a meeting. They brainstormed ideas about how to have a launch party for the new issue and NOT get broken up. I suggested that rather than throw a party, we instead put on a show.

What kind of show? they asked.

A burlesque show! I replied.

Earlier that yea I had visited New Orleans where I saw a burlesque show. It wasn’t my first, but it definitely took the cake in the my brief experience. I had felt inspired to give it a try. However, I didn’t know it would come about quite in this way...

GREAT! Can you get one together in 6 weeks?

I wasn’t really sure where to start. I had no connections whatsoever to the kinds of people I thought might be interested in taking their clothes off in front of an audience. Having been a classically trained dancer in a previous life,
alI I did know is that I wanted dancers.

So I hit up craigslist and MySpace and a local exotic dance studio. I held auditions. I found 4 dancers who would ultimately come to be known as Abby Normal, Bella Sapphire, Honey Suckle Duvet, and Machete. And me, Sugar Dish.

Because this show was being created as a one-time event in support of the magazine, Machete suggested the name “Babes in Boinkland.” And thus, the Babes were born.

We had our big debut on April 6, 2006 at the Middle East Downstairs and we
performed to an audience about 500 deep. It was exhilarating! Amazing! Wonderful! Beautiful! And SEXY as all hell.

I had made the very deliberate decision to create a contemporary burlesque troupe: one that maintained the spirit of traditional burlesque, but which used current music, themes, and dance. We performed group numbers and solo numbers, all to the music stylings of artists like Prince, Gwen Stefani, Kelis, Def Leppard, G. Love, Queen, Tweet, and so on. We had made a show, from nothing, in six weeks. And that was that.... Or so I thought.

√Ω
A little less than a year later, I contacted all the ladies to see if they wanted to do it again. I was met with a resounding “HELL YES!” We also picked up the woman who had performed as a go-go dancer at our first show, Pixy Dust, as a corps member.

We performed our second and third shows also at the Middle East, and made a pit stop in between the two at the first Boston Burlesque Expo in 2007, where we garnered a decent amount of press and started booking gigs like crazy.

We competed at the 2nd Boston Burlesque Expo in 2008, and took home the prize for “Best Group.”

In 2009 we captured the Boston Phoenix Reader’s Poll award for “Best Dance Performers.”

The Babes have moved from producing variety-format shows to focusing our efforts into larger, coherent works like The Slutcracker, Abbey Road, and Beaver, though we can often be spotted performing as part of other producers’ showcases as soloists and ensemble members. We’re constantly working to create new material and better our performance skills.

And now, as you know, were heading to Vegas to show the burlesque community at large what we’re made of. VEGAS OR BUST.

We’ve come a long way, baby, and we have YOU to thank for your love and support!