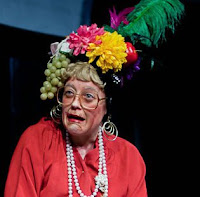 But what many of you may not know (TRIGGER ALERT: I'm about to tell you there's no Santa Claus...) is that Mary Dolan is a character created and portrayed by Jill "Petey" Gibson.

Petey and Mary are heading to Los Angeles in June to attend the Groundlings school and to take a crack at the glamorous life in Tinsel Town. Sparkletown Productions is producing a show to fundraise for the trip, featuring a slew of Hubba-Hubbies!

Petey and I had lunch last week and I thought I'd share with you our conversation about the genesis of Mary, what Petey is hoping to find, and what she'll be sad to leave behind. Enjoy!

SUGAR:  When did you start performing as Mary Dolan?

PETEY:  I started a version of Mary Dolan about 5 years ago with All The Kings Men... the character slowly evolved, slowly started to get a voice, the costume got better... And now it's perfect. ;)

SUGAR:  Is she based on a person or did you make her up out of thin air?

PETEY:  A lot of her qualities are based on my grandmother, Mary Gibson, who did vaudeville revival shows in the 70s at the Orpheum in Foxboro. My grandmother was a big fat lady who used to do Sophie Tucker numbers with a bulls-eye on her ass. And when she died, I inherited her costume trunk.

SUGAR:  Did your grandmother ever get to meet Mary Dolan?

PETEY:  No, very sad. She did not live to see Mary.

SUGAR:  What has been your most memorable experience as "Mary"? 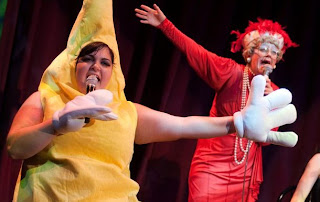 PETEY:  Ugh. So many... Auditioning for Last Comic Standing was slightly degrading, but also sort of fulfilling since everyone there was such a douchebag. My last night as Mary at The Slutcracker was super, super emotional... But you know, the first thing that occurred to me when you asked this question--which has nothing to do with performing--I was dressed as Mary, walking the streets of Provincetown, and a little girl--maybe three, maybe four-- broke away from holding her mom's hand, ran across the street and grabbed me around my knees and started saying "Nana! Nana!" I just stayed in the road and hung out with this girl for a couple of minutes. It was one of the first times I felt like "Oh. Mary's real." That everybody relates--a child sees their grandmother. It was so amazing that that happened! Luckily the parents were cool...

SUGAR:  That's way better than the time a little kid ran up and asked me why I was wearing my underwear outside.

PETEY:  Exactly the same! Children will always call it like they see it!

SUGAR:  Do you ever feel weird about having 2 personas? Especially where a lot of people have no idea that Mary is a character played by you, Petey Gibson, and that she's not an actual person? And do you ever feel competitive with Mary? 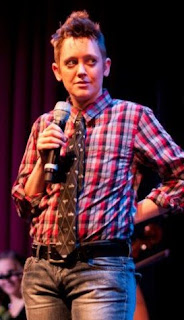 PETEY:  There's no competing with Mary. Mary has 3 times the amount of Facebook friends that I have. Mary's better in every regard... better in bed, I'm sure.... It is weird. I mean, it's super gratifying that people buy into this person, and I worked very hard to keep [Mary and me] separate on purpose, and then I slowly began to realize "Uh-oh. I'm not going to have a career if nobody knows that this successful thing that I do is some anonymous [person]." But people don't want to know, also.

SUGAR:  It's like telling someone that Santa Claus isn't real.

PETEY:  It is! It's a very willing suspension of disbelief. I told a guy one time, because we were having this conversation about how great Mary was, and I finally said, "You know, that's me." And his face just died. So that was me trying it out and it didn't work very well.


<< THEN WE ATE OUR DELICIOUS LUNCH AT CITY GIRL CAFE>>
COMMERCIAL BREAK!

SUGAR:  Mmmm hmmmm. So you're gearing up to go to Los Angeles, to make it in Hollywood, to go to the Groundlings school. How much of this plan has to do with the Mary character? Is Mary something you're looking to develop in L.A.? Do you want to develop a larger body of work? What is your intent with this career move? 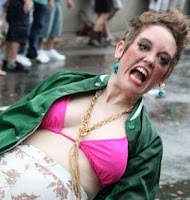 PETEY:  So, I'm going to the Groundlings school, and there I hope to develop more depth in more characters. Mary's very well fleshed-out, and then I have a couple of characters which are kind of "there"; I have their costumes, I know their basic points-of-view... but nothing really touches Mary in terms of popularity, or people connecting with them. I'm also looking to figure out how to perform as myself and get my improv chops up. I'd love to start a weekly comedy show hosted by Mary.

SUGAR:  What prompted you to make this move, exactly?

PETEY:  What really got it all started was that Nate Greenslit of Bury Me Standing went to highschool with a guy who now works at CBS, and told him about Mary. He thought it sounded great, and asked that I send him a reel. So Evan O'Television put together this amazing reel for me (embedded above during the commercial break) and when the guy saw it, he said, "When you come to L.A., let's have a meeting." And I was like "Yeah right. When I come to L.A." Then I was like, "Wait a minute. CBS is telling me something. The Groundlings is in L.A." Everything seemed to be going together, so I figured out how to get to L.A. with my partner at the time, had a meeting at CBS that went really well, met with their head of casting, then I got into the Groundlings... it just felt like that right-time right-place moment. And it seems crazy thinking about leaving Boston, but I want more. I want to be on TV. I want to really be focusing on my comedy career. And L.A. is where you go for TV and movies. So hopefully I'll find a bigger stage and, you know, a more mainstream audience. I'm really in love with my underground audience, but I also don't want to just preach to the choir. I would love to be a huge out-queer on Saturday Night Live as Mary Dolan. That would be awesome. 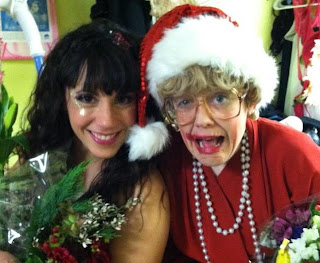 SUGAR:  Have you thought about the repercussions this is going to have on ME?

PETEY:  I have reflected on this. Have you thought about what happens when I get famous and I need a #1 burlesque dancer on my nightly show? Just sayin'.

SUGAR: I heard there was this show happening this weekend in your honor called "Happy Trails"? A send-off? What's that about.

PETEY: I have to tell you, I am so excited and also a little scared about this show.  The first half is hosted by Mary Dolan and is a bunch of my favorite numbers from the Boston arts community. The second half is hosted by Liz Fang, and I have no idea what is happening content-wise. Apparently weirdos in the community are doing things...

SUGAR: I have no idea what you're talking about.

PETEY:  Content-wise I think the show is going to be amazing. It's all my favorite talent from the last 7-8 years. I think it's going to be a celebration of where the community is at, too, because we all push each other in new and great directions. We all built this together. That sounds cheesy.

SUGAR:  You are totally going to cry.

PETEY: Oh nooooo. No more threatening me!  ...This sandwich is so good....

Comedian and character actor Petey Gibson is the creator of beloved 86-year old character Mary Dolan.  As Mary, Petey has hosted Boston's hit series, Bent Wit Cabaret, for two years; originated the role of Auntie Drosselmeyer in bawdy ballet satire The Slutcracker;  and performed stand-up at Gotham Comedy Club, NYC's Comix Comedy Club, Mottley's, ImprovBoston, and The Women in Comedy Festival 2010-2012 among many other venues. As a member of the award-winning comedy troupe All The Kings Men, Petey has traveled internationally and brought a whole cast of characters to diverse audiences.  In Boston, Petey has produced, written, and performed in countless shows, including the sold-out smash The Mary Dolan Show.  This summer, Petey heads to The Groundlings School in Los Angeles.
Posted by Hubba Hub at 9:30 PM