For our next two sessions, Boston's branch of Dr. Sketchy's is honored to be hosting two different out-of-town performers (see our previous post for more on September's guest...). Our first guest will be Ruby Solitaire from NYC!  We got a few words... well really, a few very well-crafted sentences... out of her about who she is and what she loves about burlesque. So come check out the fabulous Miss Ruby after you read this! 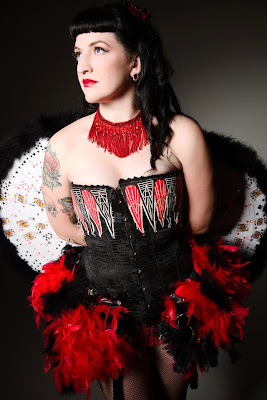 Who are you, what's your thing, how long have you been doing burlesque - tell me the basics about you and what you do.

I'm just a girl who really, really loved "Gypsy" when she first saw the Bette Midler version on TV - it was just fated to happen after that, though it took running away from a marriage and moving in with a psychobilly band to get me to where I am now. I've been doing burlesque since 2009, when I took a class with Trixie Little. I was lucky and sort of fell into a lot of shows right away. When I started I did a lot of rockabilly numbers, but since then I've moved pretty confidently into nerdlesque - I'm a huge geek, and love that nerd culture is having a super sexy renaissance. I'm really proud to be a part of that


Describe the first act you ever performed. What are you proud of about it?

I was lucky in that Trixie is an amazing teacher. I've heard wonderful things about NYSB, and taken some classes there that really blew me away, but Trixie gave me a great foundation that I still fall back on, and she really helped me with my first couple acts. My first night performing was to a packed theater in Northampton, MA and I did both a group number to St. James Infirmary and a solo act to the original version of Tainted Love. With both I was proud that I learned the choreography as well as I did - I can be a klutz and a space cadet - but it was also a huge boost to my self esteem. Anyone who gets up on stage and does this should be proud of that very first night, because you have no idea what to expect, and it really does change your life. What I'm most proud of is that Tainted Love is an act that I have continued refining and growing and still can pull out and perform today. I mean, who doesn't love an act that starts out with a girl running onstage with a pistol?


Do you have any backstage rituals for getting ready for a show?

I really don't - there's never enough space or time for that sort of thing! I suppose my ritual happens before I get to an event - I listen to the music for my numbers over and over for hours before the show, usually while I'm driving there (I travel all over the place). I walk through the routines in my head . . . though sometimes I get a bit carried away and start doing arm movements in the car. I get strange looks from other drivers.


What do you love or hate about the burlesque scene?

I love that the burlesque scene really is one of the few places where anyone of any look, color, body type, gender - whatever - can get up on stage and be the sexiest thing you've ever seen. It legitimately is. There's very little tolerance for anyone who tries to change that. Unfortunately, there is definitely stratification, and there are promoters who - despite the ethos we try very hard to maintain as a community - still only work with girls who look a certain way. This is unfortunate, and I wish it wasn't a thing. Still, these promoters are the exceptions that prove the rule. Generally - if you know who you are and own it, that's sexy and that will get you a place on stage. I love that.


Do you travel much? If so, where, and what's it like for you to perform in different cities?


I travel all the time. This summer I'll have performed in a half dozen states and twice that many cities. I probably spend 20 hours a week on the road at a minimum. The crowds do have distinct characters in different cities, and you get to know what works best in what places. Even within cities the crowds vary - what happens at R-Bar is totally different than Parkside Lounge, and they're both in Manhattan. No matter where you are though, people are supportive and there to have a good time, which gives every night a really positive vibe.


I think they really serve everyone in the artistic community - everyone knows it helps graphic artists practice, but it's also great for performers. We have to think about how our body moves and looks, it develops a lot of body awareness that you might take for granted. It's also great to make art social, rather than hiding away in a room, sketching eggs and soda cans.


Any upcoming shows or classes to promote?